If you have a dog, chances are you have had a conversation or two with them, or if you’re like me you have multiple conversations a day. It is not unusual for anyone to over hear me talking to or serenading Odin (usually Disney songs). Most pet owners instinctively communicate with their animals in a high pitch and affectionate voice that is similar to baby talk, coined dog-directed speech (DDS). Odin responds to me by tilting his head with an inquisitive and happy look on his face, almost like he is trying to understand what I am saying. My family and husband make fun of me for having this types of conversations with Odin. But does communication do anything for your dog?

Researchers at the University of York in the United Kingdom set out to answer this question. They wanted to determine whether or not dog speak is useful for dogs. For the study, they performed two experiments where humans interacted with dogs. The first experiment tested adult directed speech against dog directed speech while the second tested content.

In the first experiment, there were two speakers. Each speaker played previously recorded content to see which the dog would be more interested in. One speaker’s recording had dog-related content (such as “Who’s a good boy?”) spoken in DDS, whereas the other speaker played a recording that had adult-related content spoken in adult-directed speech (ADS) with no dog related content. ADS is the normal speech patterns, tone, and pitch that would be found in a normal conversation between two adults. Both the recordings were played for each dog and the dogs then would show their preference in speaker by either looking at or moving towards the speaker. The experiment was performed using a total of 37 dogs and on average, the dogs spent more time showing preference for the DDS speaker relaying dog content. The dogs were more likely to interact and showed preference towards the speakers using DDS to relay dog related content.

The results from the first experiment revealed that dogs prefer humans who address them using DDS and are relaying dog related content. However, was their preference based on the content or the type of speech? Did the dogs only favor speakers because they were using DDS or was it because of the content? The next experiment was used to further investigate the extent the dog’s preference was based on the type of speech or the content being spoken. 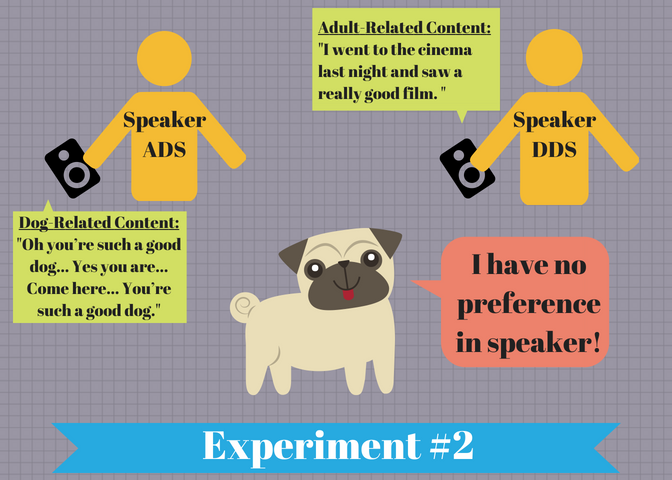 The second experiment used 32 dogs and was set up similar to the first experiment. There were two speakers and each played a recording for the dogs. However this time, the content was swapped. One speaker’s recording had dog-related content spoken in ADS, whereas the other speaker played a recording that had adult-related content spoken in DDS with no dog related content. The results from the experiment showed “that there was no significant difference in dog’s’ attention or proximity preference to speakers of DDS or ADS where content and prosody did not match” (Benjamin, 2018). This showed that neither content nor type of speech was responsible for the DDS/dog related content preference found in the first experiment. The dogs did not show preference for DDS when the content was not dog-related.

Overall, the results from the study showed that dogs need to hear relevant words in DDS in order for them to find it relevant. So next time you want to interact and communicate with your dog, remember to convey dog related content in a high-pitched emotional voice. And next time someone teases you for talking to your dog using DDS, remember that you have the science to back you up!