Today was a no-travel day and we wanted to spend the day venturing around Portland. We headed into the city at around 10 am ready to do some walking. We parked in the Downtown and headed towards the water. I stopped to grab a coffee at a nearby Starbucks and left Odin outside with my husband. While waiting for my coffee, I notice out of the window that another dog is approaching Odin. As the owner made a point of bringing over his dog to say “Hi”, my husband told Odin to “go say Hi” and all went well. Odin and the other dog interacted without issue. This was a great way to start off our day. Odin saw that he might be able to meet some of the dogs he sees and this will sometimes reduce the frustration he experiences when he sees other dogs. Most of the time, Odin becomes reactive because he is frustrated that he cannot play with or meet the other dogs he sees. Another theory I have in regards to his reactivity is that he does not know if the approaching dog is a friend or foe and assumes everyone is a foe until he is told otherwise. By using the “go say Hi” cue, we are informing him that the dog is a friend and he can go meet them. Regardless of what causes his reactivity, we are learning that the “go say Hi” cue is a good tool to have when we know that the other owner is okay with the dogs meeting.

From Starbucks with a skinny mocha in hand, we head towards to water. Once we get there, we notice that there are a lot of dogs, bikes, and geese on the waterfront path. We decided that it will be best to avoid the pathway and instead walk along the city street that runs parallel to the water. From there we are able to observe other dogs across the street and Odin does fine. He plays the engage-disengage game with me and does not seemed bothered by the dogs across the way. We continue walking following the water until we reach Oak street and turn back towards the city in search for VooDoo Doughnuts. VooDoo ended up have waaayyy too long of a line so we noped out of there and headed to our next destination, Patagonia.

Patagonia provided a great training opportunity for Odin. Dogs are allowed inside and Odin came in with me and we practiced heeling and focusing on me rather than the clothing and other people in the store. We practice tricks and greeting people who wanted to say “Hi”. One of the workers in the store came over with treats in hand and asked Odin to perform a handful of commands (which he did perfectly). Overall, I was very impressed with him and his composure inside of Patagonia. I even overhead a couple of customers commenting on how well behaved and trained he was. This always makes me feel very happy as a lot of times I feel that people only get to see the reactive side of Odin in public rather than the well behaved, focused boy that I know and see every day. It makes me feel very proud that he is my dog.

From there we headed off towards a location that we knew had a handful of food trucks. On the way, we passed by multiple dogs (all were on the other side of the street or intersections) and Odin did great. No reactivity or signs of stress. He was doing great and feeling very confident. We found the trucks and a great place to call home-base while my husband and I took turns grabbing food. Odin was very happy with this spot because he got spoiled with food. One of the vendors brought him some lamb to try which he enjoyed after earning it by performing a handful of tricks.

The food trucks were only a handful of blocks away from Pioneer Square so we were going to make that our last stop in the city. Once there, we took a handful of pictures and that was when I should have realized Odin’s change in demeanor. He was tired and not focusing as well. We stayed a couple of minutes too long taking pictures and that was when another dog came into the picture. The other dog was halfway across the square, but that meant nothing to Odin. He was tired, cranky, and went straight to being reactive upon seeing the other dog. We rushed him out of the square, however the owner and the dog were going in the same direction. We finally found somewhere to hide and get the dog out of Odin’s view. It took a while to calm him down enough to try to leave the square. This was my fault. We were out for too long and he was too tired. We had spent 2.5 hours in the city and I did not consider that he could be mentally tired. It usually takes so much to tire him out that I did not realize how mentally tiring this excursion had been for him. 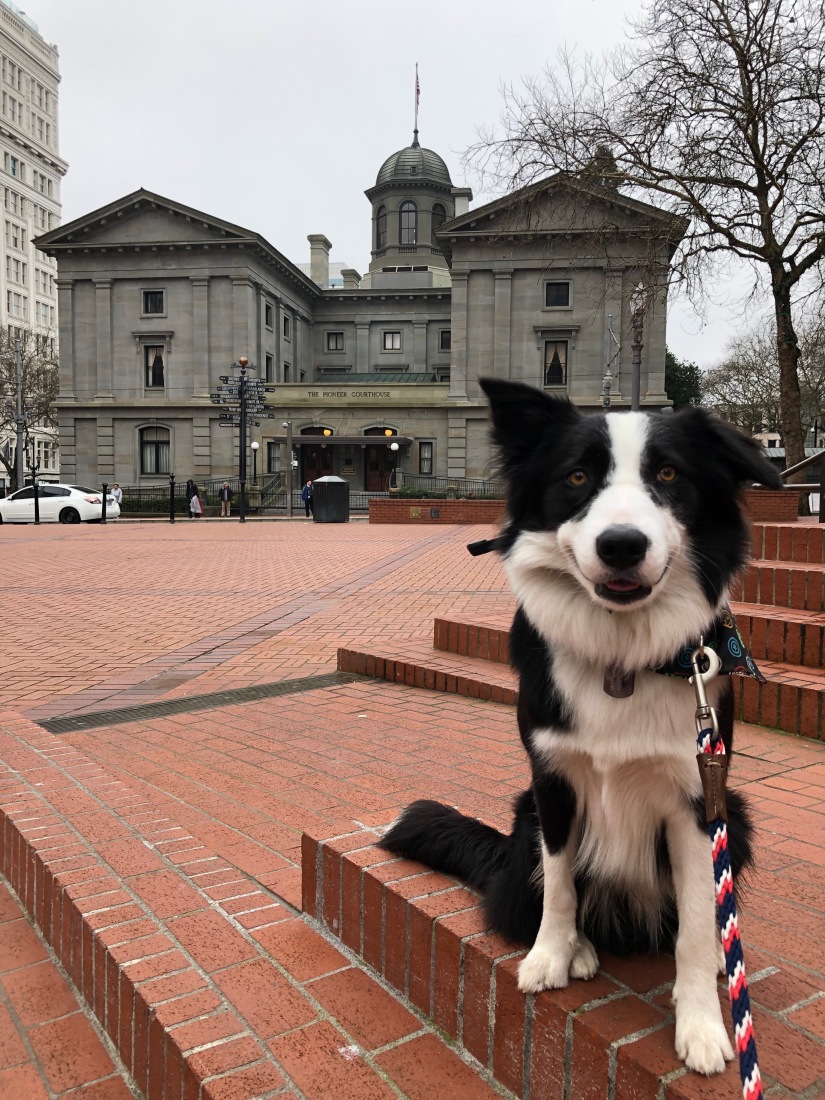 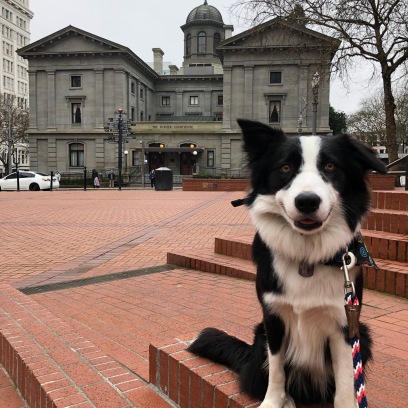 Although the day ended on a sour note, he still did wonderfully for 99% of the day. I was impressed with his behavior and we had a really great day. We explored a lot and got to see and smell so many new things. I learned a valuable lesson today and in the future, I am going to make sure that I do not extend his outings for too long and consider his mental stamina.

Since he had such an eventful day, he passed out asleep in his crate when we got home. My husband and I took this opportunity to venture out on our own. We ended up going to the Oregon Zoo (highly recommend) while Odin was safe in his crate, dreaming about the wonderful adventure he had.