My husband, Derek, was telling me about his day at work last night, specifically that one of his co-workers asked him about how Odin was with other dogs. Derek explained that Odin was reactive and to his surprise, the co-worker actually had heard of reactivity because his dog was also reactive! This was really refreshing as most dog owners do not know about reactivity (unless they have a reactive dog).

So, in response to the little information I could find, I have created my own explanation of fear based reactivity: 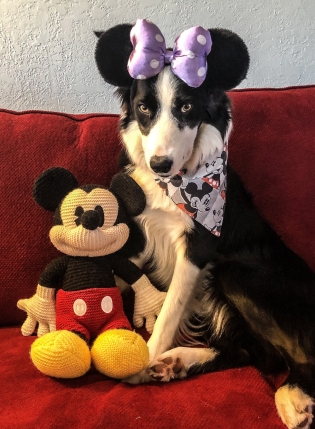 Picture this, you are driving past Disneyland (with no intent of visiting) with your kid (or niece or nephew or some little kid). The kid can see the top of the Matterhorn and the entrance to the park. They can smell the popcorn and can hear all the sounds of joy protruding from the park. They get excited because come on, it’s Disneyland! They excitedly ask you if you guys can go inside the park. Sadly, due to unforeseen circumstances, you cannot stop (whether it be because of your schedule or monetary reasons). This makes the kid upset and they start crying and throwing a temper tantrum because they do not understand why they cannot go. All the other kids around them get to have fun and get to meet Mickey Mouse, but they are stuck in the car.

This is frustration based reactivity. And after a while of seeing other dogs (or Disneyland) time and time again and not getting to have fun, they become frustrated at the first sight of another dog. They know from past experiences that they cannot get to this other, super fun dog. So they throw their temper tantrum. Disneyland is no longer a fun place; instead it brings back the feelings of what they are missing out on.

Overall, frustration based reactivity is your dog’s arousal and stress of seeing another dog and not being able to interact socially with them. Leashes interfere with normal social interactions. Creates a barrier between dogs. They cannot greet each other which may create a stressful situation for your dog. That stress and arousal turns into frustration and prompts their aggressive behavior. Generally, frustration based reactive dogs do great with other dogs during off-leash situations. However, once leashed they become frustrated with their new barrier. In my next post, I will discuss how to overcome the pesky, unwanted behavior of frustration based reactivity.