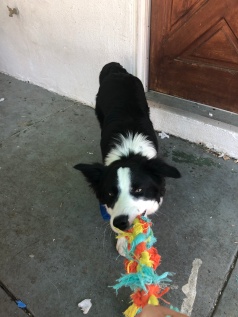 The methods that have received the best results for managing frustration based reactivity involve teaching the dog to turn and look away from their trigger before reaching/approaching their threshold. You are giving them access to something else rather than the approaching dog. The best way to do this is to reinforcing calm/wanted behavior with play or treats. For Odin, I alternate between playing tug and treats. It all depends on the situation. Sometimes treats work better, and other times playing does. Showing them that you can be more fun or cooler than the dog across the street can help them to be less frustrated when seeing another dog. They will think that even though they do not get to go see the other dog, they still get to play with you. But this needs to be done before your dog reaches threshold. Once they reach their threshold, they will not care if you have a 10 oz steak; their brain will be switched off and will not be able to break its focus from the approaching dog. Overtime, you should be able to decrease the distance between your dog and the trigger. Most dogs will learn to auto-watch eventually. This means that they will learn to focus/look at you when they see and approaching dog because they know that the approaching dog means that you will play with them.

Two other training methods/tool are vitally important in managing your dog’s reactivity:

Set Ups are very important for frustration based reactive dogs. Treating and managing reactivity goes much faster if you can arrange a set up with your dog. The decoy dog (controlled approaching dog) you are using will not act unexpectedly because they are a part of the training. You can increase and decrease the distance between the dogs at will. If you do not have a friend with a dog (or if your dog is like mine and is not reactive at dogs they know), then seek out a behaviorist as they will have access to decoy dogs. You can also use places like the parking lot of the vet or local pet store for semi-controlled set-ups. For the most part you will know that the dog and their owners will be heading into the store and back to their cars. You can have better control over the distance between your dog and the trigger rather than at the park.

Target and other toy stores sell life size dog stuffed animals that can be used if you really do not have anyone or anywhere to go to successfully practice reactivity. You can create the set-up by using the stuffed dog. Have someone stand with the stuffed animal across the street with it on leash and train the same way you would with a real dog. If you need to make it smell like a dog, bring it with you to a local training group or the dog park. Some dogs with really good noses are not tricked by the fake decoy dog unless it actually smells like a dog. It is important that you do not introduce your dog to the stuffed dog. This will ruin the allusion and you will not be able to use it as a training tool. 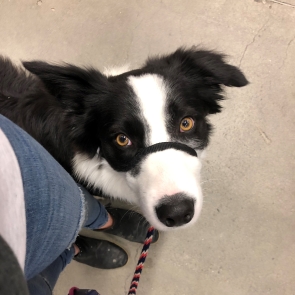 Emergency U-Turns are helpful for both frustration and fear based reactivity. You want to use this when you un-expectantly run into another dog (they come from around a corner or from behind a bush or any type of blind spot). This takes a while to learn, but it’s not teaching the dog that takes a while, it’s reprograming yourself to instinctively U-Turn in these situations. The key to a successful U-Turn is to do a quick pivot and keep you composure stress free. This really can come in handy and actually is a really good technique to avoid hard situations. Just this past week I used the emergency U-Turn twice in Home Depot. I pulled out into the main walkway without checking and almost walked Odin into a dog. The emergency U-Turn saved Odin from becoming reactive. He didn’t even notice the other dog because we pivoted quickly away from the other dog. I happily laughed and cheerily talked with Odin to keep his attention on me and then smothered him with treats. He had no idea what was going on but he knew he was great at it! 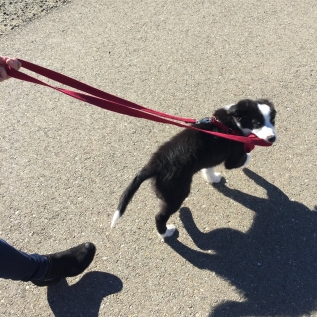 ***Remember that all dogs like different reinforcements, so make sure to use one that you know your dog will find as high value. For recall we use a tennis ball for reward however while doing reactivity training, I generally use chicken or hotdogs. I think the smell of food is very helpful for him during reactivity training and a tennis ball is unable to hold his attention in these situations. Your reward may differ for each training or situation, so be pre-prepared to try out different reinforcements. I am always carrying a tug toy and an abundance of treats with me. Another technique I have read about is teaching your dog to play tug on command with their leash. This way you will never be without a toy to play with. You can’t really forget your dog’s leash while on your walk.***

1 thought on “Tools for Managing Frustration Based Reactivity”