This week Odin was very high energy as he was on bed rest due as he was neutered last week.  His vet said that walks were okay, but any other activity was highly discouraged until he was fully healed.

Today was a great walk. We left the house with some deli Turkey as Odin’s high value treat. He has been a little more pull-y than usual but I think that is because of the activity restriction. He has been very bored and is very excited to go out on his walks. About half way through our walk, I saw a guy approaching walking his dog towards us on the opposite side of the road. Luckily, Odin had not seen the dog and there was a car up ahead that would be able to block his view of the oncoming dog. Once we were behind the car, Odin did hear (or smell) the other dog and got a little excited but his default reaction was to look at me! (which equaled tons of turkey for him). We walked past the car and I told Odin to look at the dog that was walking away (and far enough outside his threshold). He happily looked and then looked back at me. No fear or frustration. We continued our walk and we shorty after we were joined by two people walking behind us. Odin got very interest in a storm drain (we checked and there were no red balloons inside) and he very nicely let the people pass us.  Next we saw a kid riding a bike with training wheels in the middle of the street. Ringing his little bell, as happy as can be. Odin looked at the boy, tilted his head in curiosity, then looked right back at me. I was a proud mama!

Another great walk today.  Odin sometimes get too distracted and frustrated by people that he can see and wants to meet.  This can sometimes result in a reactive episode.  We often walk by a woman in a green sari and man in white turban.  Odin is obsessed with them and very much wants to meet them, which sometimes results in him becoming frustrated and reactive.  Overtime, they have become weary of Odin.  Today, however, Odin did great while the walked passed us across the street.  Odin was able to stay engaged with me and even did an Orbit while they were walking past.  I am very happy that Odin was able to perform some tricks while they passing.  Not only did it show how well he is managing his reactivity but also, I want to show people what a goofy, smart, and attentive dog he is (not the screaming teenager that throws temper tantrums when he becomes reactive.)  A couple of blocks later, Odin was tested with and extreme challenge!  A white cat wearing a bell darted across the street up ahead of us.  Odin stared at cat and pulled towards the cat, but he was responsive and checking in with me.  “BUT MOM!  Don’t you see that cat over there?!”  He continued to slowly walk with me and past the cat.  However, the stilly cat started following us (Thanks cat, you were not making this easy for us) But Odin did very well and kept moving.  He would check behind us to keep an eye on the cat every time he heard the “ding, ding” of the cats collar.  Once we reached the end of the block, the cat stopped following us and Odin was bored with the cat.  Coming to the end of the walk, there was one last challenge.  Two dogs were crossing the street a head of us at the T-intersection!  Before Odin had registered what he was seeing, I turned and said, “Let’s go” and we proceeded to back track.  His U-turn was perfect and his amazing, beautiful, engaging eyes were staring right back into mine.  He had no worries about what was behind him.  We were focused on each other.  Once we were a good distance away, I had him practicing his focusing/calming behaviors.  He was able to perform his “chill” and relax on the sidewalk while the other dogs were in view.  Once they crossed the street and proceeded to walk away from us, we finished our walk.  It was a great day. 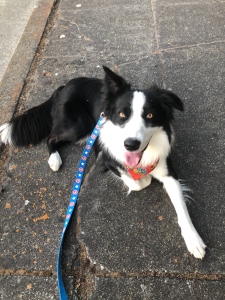 Today’s walk was very boring.  No other dogs were out, no silly cat with a bell.  It was overall very uneventful.  Minus the one bark, Odin let out when he saw a stroller come out behind a car.  Once he realized it was not a threat, he looked back at me.  I was relieved that he only barked once (probably more of a warning bark) and had no other signs of discomfort.