Everyone has accidently reinforced an unwanted behavior. Whether the behavior was like mine and built its annoyance over time or was a bi-product of another behavior, or was just formed completely by accident, completely extinguishing the behavior can prove to be difficult. This post is meant to serve as an informational on how to deal with such an issue.

Happiness is a function of positive reinforcement

Depression is a function of punishment

And FRUSTRATION is a function of extinction

So what does that mean?

The first two make sense, but the last line is a little hard to understand without a little context or background information. So here we go.

During the process of extinction, a previous learned (and reinforced) behavior stops being reinforced. The decrease in the reinforcement of the unwanted behavior produces an aversive emotional state known as frustration.

This is still a little hard to understand so let me give you a very human example.

Let’s say every time you go to the grocery store, you buy your kid a candy bar. This happens every single time so now your kid associates going to the grocery store with getting a candy bar. Now let’s say this particular time you go and you decide you do not want to support your kids sugar addiction anymore so you tell them that they are not getting a candy bar this time. Your kid does not understand. EVERY SINGLE TIME they have come with you to the store has resulted in a candy bar. What’s different now? Your kid is probably not going to understand your rational and they start crying. You now have a frustrated and upset kid. You tried to extinguish the association between going to the grocery store and candy, and now you have a frustrated kid that does not understand why they are not getting one.

Now let’s dive into an example of the relationship between extinction and frustration I have encountered with my dog, Odin:

Odin always bring us a toy while we are sitting on the couch because he wants to play fetch. We reinforced the behavior by always throwing the toy for him. Know whenever he brings us a toy, he expects us to throw it. This can get really annoying if we are trying to relax or do something else while on the couch. If we ignore him, he becomes frustrated and starts to pull on the couch cushions to try to get our attention. Ignoring (extinguishing) his behavior leads to more and more frustration (more pulling on the couch and barking/whining). We eventually give in to him because his behavior is super annoying and we usually end up throwing the ball (sometimes we might put him in timeout, but this is losing its power).

This frustration Odin is showing is called an extinction burst, which is essentially a physical display of increased frustration. His frustration will build, until he gets what he wants.

There are multiple issues with using extinction alone:

(1) Extinction is not a quick fix. Most dogs will escalate their frustration which will become harder and harder to ignore. And reinforcing the unwanted behavior (as I have done…) just teaches your dog that throwing the temper tantrum gets them the reinforcement they want. Ignoring your dog’s frustration bursts is not a realistic solution (and it’s just not very nice for the dog either).

(2) Increase in emotional behaviors, frustration, and aggression which are same side effects as punishment.

How to deal with it:

So whenever Odin brings me the toy while I am sitting on the couch, rather than ignore him, I am going to reinforce another behavior such as doing some trick training, playing a game of Find It or presenting him with a Kong to chew on. Ideally, this new appropriate behavior will serve the same function as the unwanted behavior, however finding a behavior that serves the same function as fetch and that can be done in the house… well I haven’t been able to think of anything. If you do have an idea please let me know! 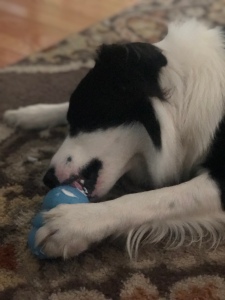 What does this mean for you?

This is a better overall example as the new reinforced behavior serves the same basic function as the unwanted behavior. You are replacing your food with a more appropriate food option. Eventually, you should be able to decrease the amount of yummy food in the Kong and they should stop begging you for food all together. The important thing about extinction is to ensure that you are showing them what to do instead so they do not build up frustration and annoy the heck out of you. This is better for both you and your dog.